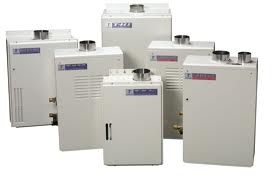 There are a lot of factors to consider with these units so I’ll lay out what you need to know about the tank less water heater so you can make an informed decision before you get, well, into hot water.

Whether a tank less water heater is point-of-use  or a whole-house unit, they work the same basic way. Cold water enters the unit and is heated by a heating element (heat exchanger) which is turned on by a flow activated switch. The heat exchanger can be electric resistance heating coils or a gas fired burner using natural gas or propane. (Gas units generally have more heating capacity and larger whole-house units are typically gas fired.)

There are three variables that have to be considered in sizing a Tank less water heater.

Tank less water heater (Whole House)
Whole house units mean that they have higher GPM flow rate capacity and can handle demand for more than one fixture at a time. For example a unit may handle two shower fixtures at one time or a dishwasher, kitchen sink and lavatory hot water faucet at one time. Why the different number of fixtures? Because different fixtures use different amounts of water. Some shower heads can use six times more water than a bathroom lavatory faucet. 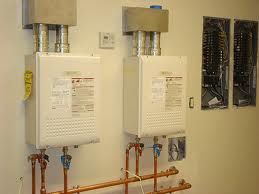 So the size and number of whole house tank less water heater you need will be largely driven by flow rate and that is determined by the number and types of fixtures you may have running at one time. And the worst culprits are shower heads. That’s why you may need more than one whole house tank less water heater hooked up in parallel to meet your hot water demands, especially for simultaneous shower usage.Whole house units are much more expensive than point of use units and cost from several hundred to several thousand dollars (without installation).

Tank less water heater flow rate calculations
The Federal Energy Policy Act of 1992 required all faucet / shower fixtures made the USA to have a flow rate of no more than 2.2 GPM at 60 PSI. Often you can get below 2.2 GPM with low flow aerators but before 1992, older fixtures used much more water than 2.2 GPM. To determine your required GPM, add up how many fixtures of what type you will have served by the tank less water heater:

Cost of Heating Water in the Home: 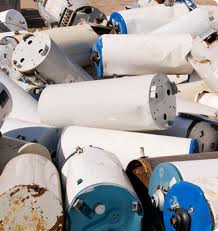 Generally, 20 percent of a home’s energy use comes from heating water for bathing, washing dishes, laundry, and cooking. Annually, this can add up to more than $450 to operate a conventional storage water heater.

The process of heating water in a storage tank suffers from what is called, “standby loss”. Standby loss describes the energy wasted to maintain a specific temperature in the tank. Standby loss accounts for up to 20 percent of a home’s annual water heating costs.

A Tank less water heater is often referred to as, “on-demand water heating,” because it does not store heated water. Once the faucet is opened, water flows into the heater where a sensor turns on the heat exchanger or heating coils. Water flows through the heating coils, it is heated to the desired temperature. Once the faucet is closed, the sensor automatically shuts down the heating coils. The entire process takes about 5 seconds to heat the water initially.

We have seen that since there is no standby loss, a tank less heater can be more energy efficient than their counterparts. Other advantages of a  tank less water heater are that they do not waste water since water is heated almost immediately. Also, you will not run out of hot water in the middle of a shower.
Since tank less heater are smaller and do not hold water, their life span is 20 years, twice its counterpart’s.
There are tax benefits to a tank less water heater as well which you can find

A Tank less water heater has its drawbacks as well. If using a gas heater, keeping the pilot light continuously lit may reduce its efficiency. Also, smaller units may not work as well when washing clothes or dishes and taking a shower at the same time. Lastly, the initial cost of a tank less heater is more than a conventional tank storage heater.

Call Option One Plumbing For A Free In Home Estimate For Your Tank Less Water Heater Installation Today: 1-800-905-7115